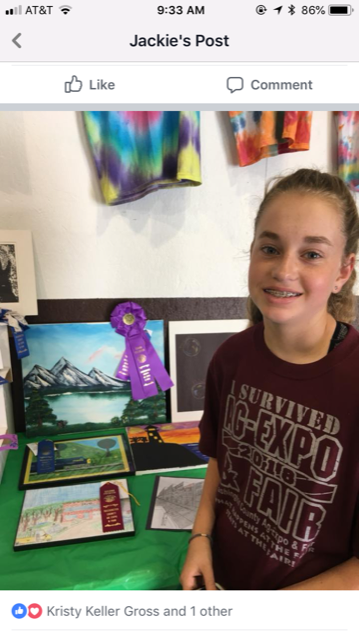 In May, I was blessed with the opportunity to teach 7th and 8th graders at St. Mary’s in Hagerstown, MD the Bob Ross technique.  I only had two hours to work with them (normally a class is 4 hrs) but they did an amazing job.

Well, today, 3 months later, Stacey Renken, Art Teacher at St. Mary’s that invited to the school, sent me a message stating that 4 of the students entered their paintings in the Washington County Ag Expo and Fair and they all won!  One received the “Grand Champion” and the other 3 earned first place!  What a blessing!  I am so supper exited for them!  What joy I am feeling today!  I may actually me more exited than them!!!

Thank you Stacey Renken for the blessing of working with these amazing students and also for letting me know they entered and won!  I ran out right away and purchased a copy of the newspaper!!!!

Below is a photo of the article that was in the August 2nd issue of “The Herald Mail” newspaper!

St. Mary Cathalic School students in grades five through eight may participate in the art club after school.